Top
Next All Prev

Watch the video clip below to see the new officially licensed Kerri Walsh “Signature Series”
volleyball by Wilson, featuring original art by Gentry Smith.
(Volleyball is featured at approximately 01:45 during the photo shoot)

The goal for the “Kerri Walsh Primary Logo Mark“ was to capture the raw, athletic, competitiveness of Kerri’s game-time persona, mixed with her congenial off-court personality. Gentry Smith Design achieved this by creating a stylized illustration that captured Kerri’s silhouette in an iconic volleyball position.  This design was inspired by a series of Kerri Walsh action photos, used for artistic reference, and complimented with a soft color pallet and feminine font selection.

The “Walsh Volleyball Icon” incorporates the letter “W“, created within the negative space of the individual panels of the volleyball. The balls is positioned in such a manner to create the illusion of a happy face, which was done intentionally, as a reference to Kerri’s nickname, “Six Feet of Sunshine.”

The Kerri Walsh ”Signature Series” brand was most predominantly featured on an officially licensed Wilson Sporting Goods Co. volleyball released in 2012 after the London Summer Olympics. 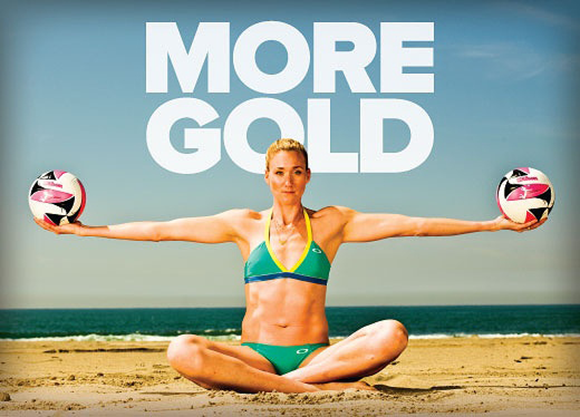